In April of this year, a nervous, yet confident Zweli, reached out to us at The Perfect Proposal, to assist in asking his sweetheart, Nadia, for her hand in marriage.

Zweli and Nadia both reside in Gauteng and have been dating for around 3 years now.  He met Nadia at church, and the proverbial romance blossomed from a friendship to a loving and long term relationship.

He had seen a helicopter proposal we had done along the beautiful coastline of Port Elizabeth’s King’s Beach, and knew he wanted the same for his proposal!

Zweli and Nadia were planning a trip to Port Elizabeth at the end of July and felt that this would be the perfect time to propose and so we set the wheels in motion.

The brief was simple; a helicopter proposal, caught on camera and film, with writing in the sand along PE’s Pollock Beach, followed by a private dinner for two.

Port Elizabeth is notorious for having 4 seasons in 1 day, and so we had to have a plan B in place, just in case Mother Nature did not want to play along! As it so turned out, plan B was eventually incorporated as well with a few minor last-minute changes to accommodate the weather, we settled on the 30th of July for the proposal to take place.

Zweli let Nadia know they were due to have a romantic Dinner at Hackelwood Hill so that she knew to dress appropriately, but she was none the wiser about the “detour” trip along the coastline.

Just before Sunset, they took off from the airport and flew over the beachfront,  where we had written the words,  WILL YOU MARRY ME NADIA? in the sand.  At first, Nadia did not realize that she was being proposed to, but as the helicopter hovered a little, and she took in the inscription in the sand, she turned to Zweli in shock and that’s when he popped the all-important question to her! What a moment to behold, which was also captured on video.

Once they landed, we had arranged for a photoshoot of the couple celebrating the moment with a bottle of sparkling wine and the photoshoot continued at the Guesthouse in their lovely manicured gardens. Zweli had also asked us to decorate the private dining area in her favourite colour – red, with rose petals and a stunning bouquet of flowers and red Lindt chocolates adorned the dinner table. As they entered the dining room, her favourite song, Best Part by Daniel Caesar, was playing in the background as Zweli led her to the dining table. The rest of the evening was spent at their leisure allowing them both time to savour the excitement of the day and enjoy the romantic dinner.

We would like to thank Zweli for allowing us to be part of this very special occasion and wish him and Nadia much love and happiness going forward.

A romantic helicopter proposal is always a great proposal idea if you have the budget, there are so many options to add to this idea. 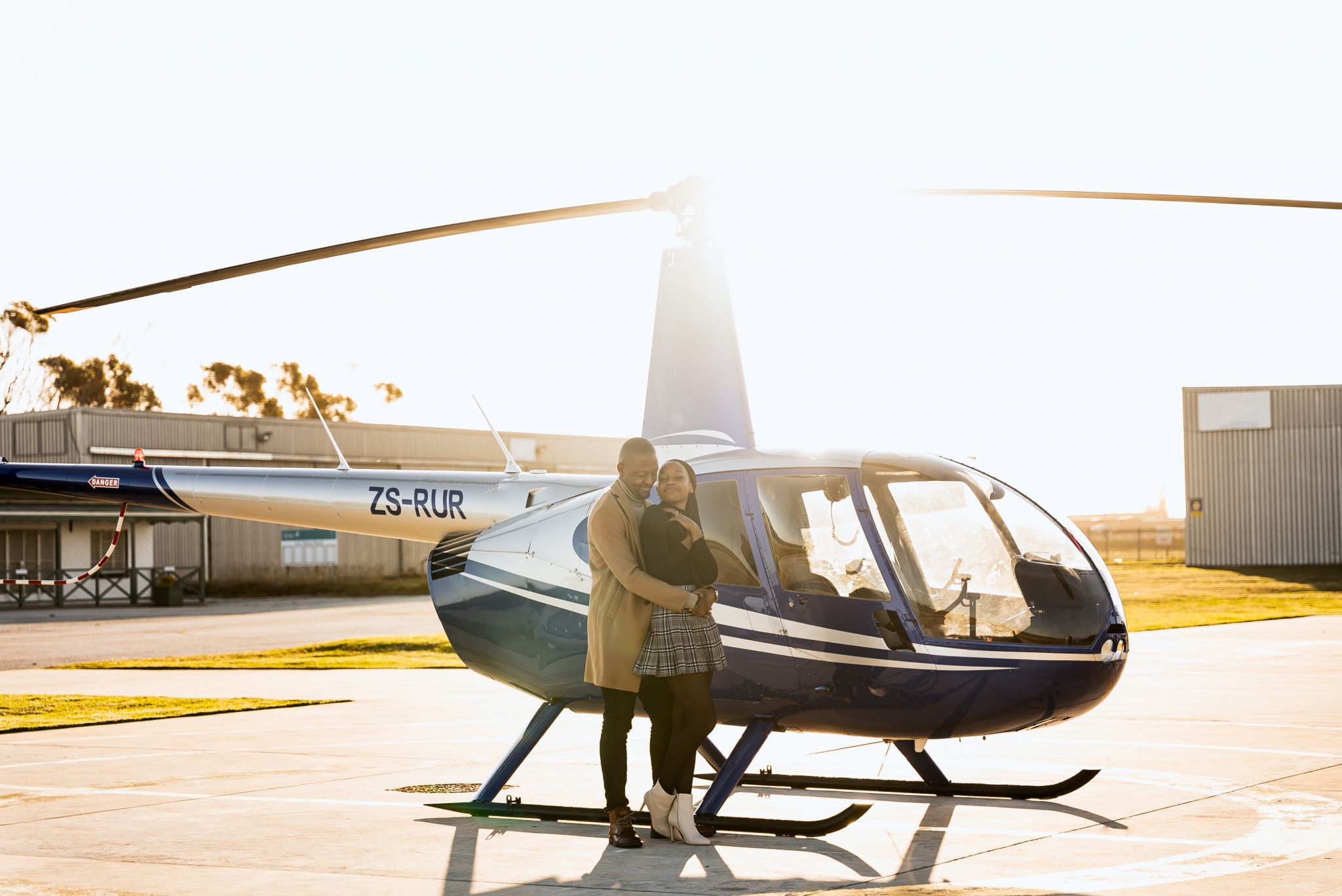 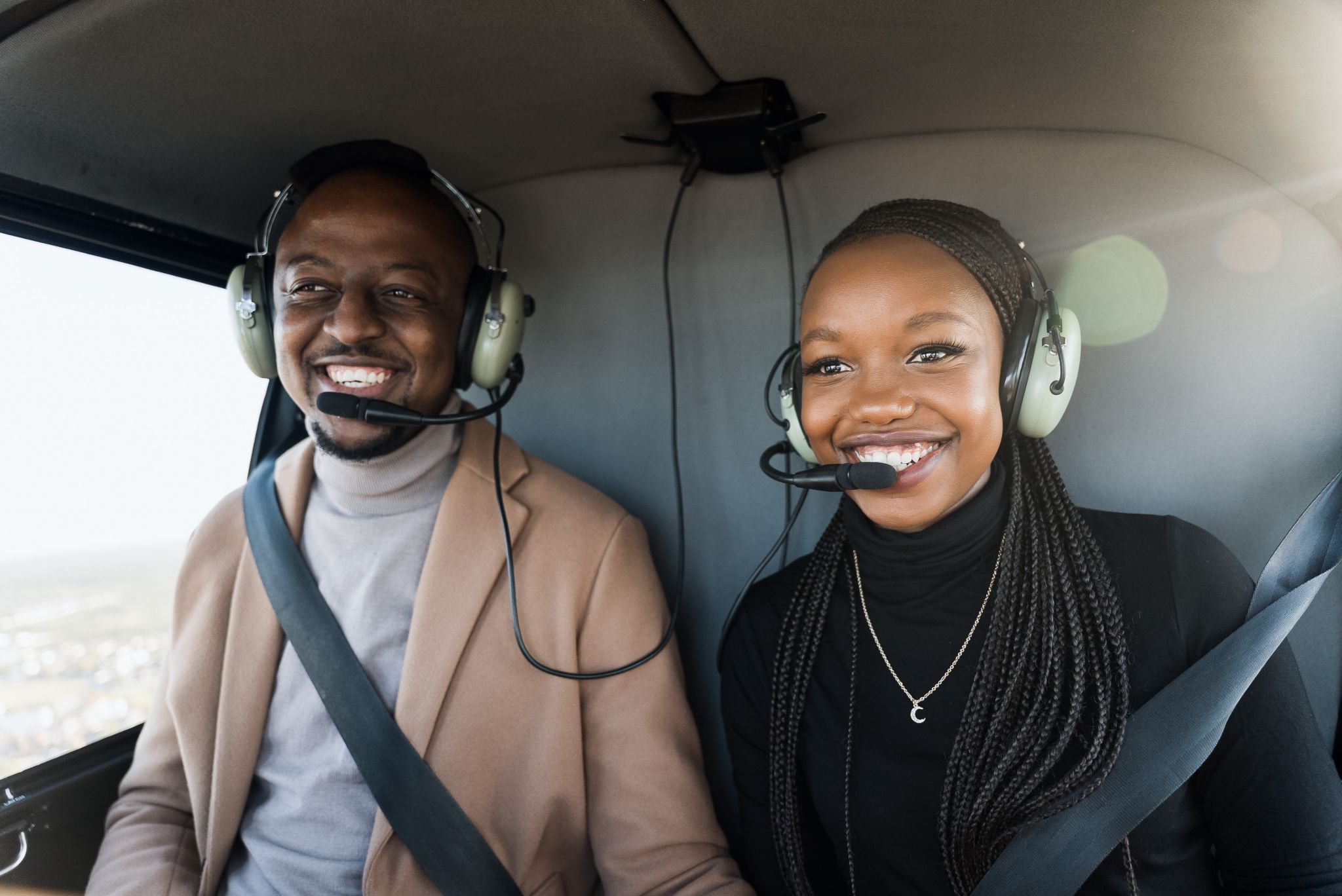 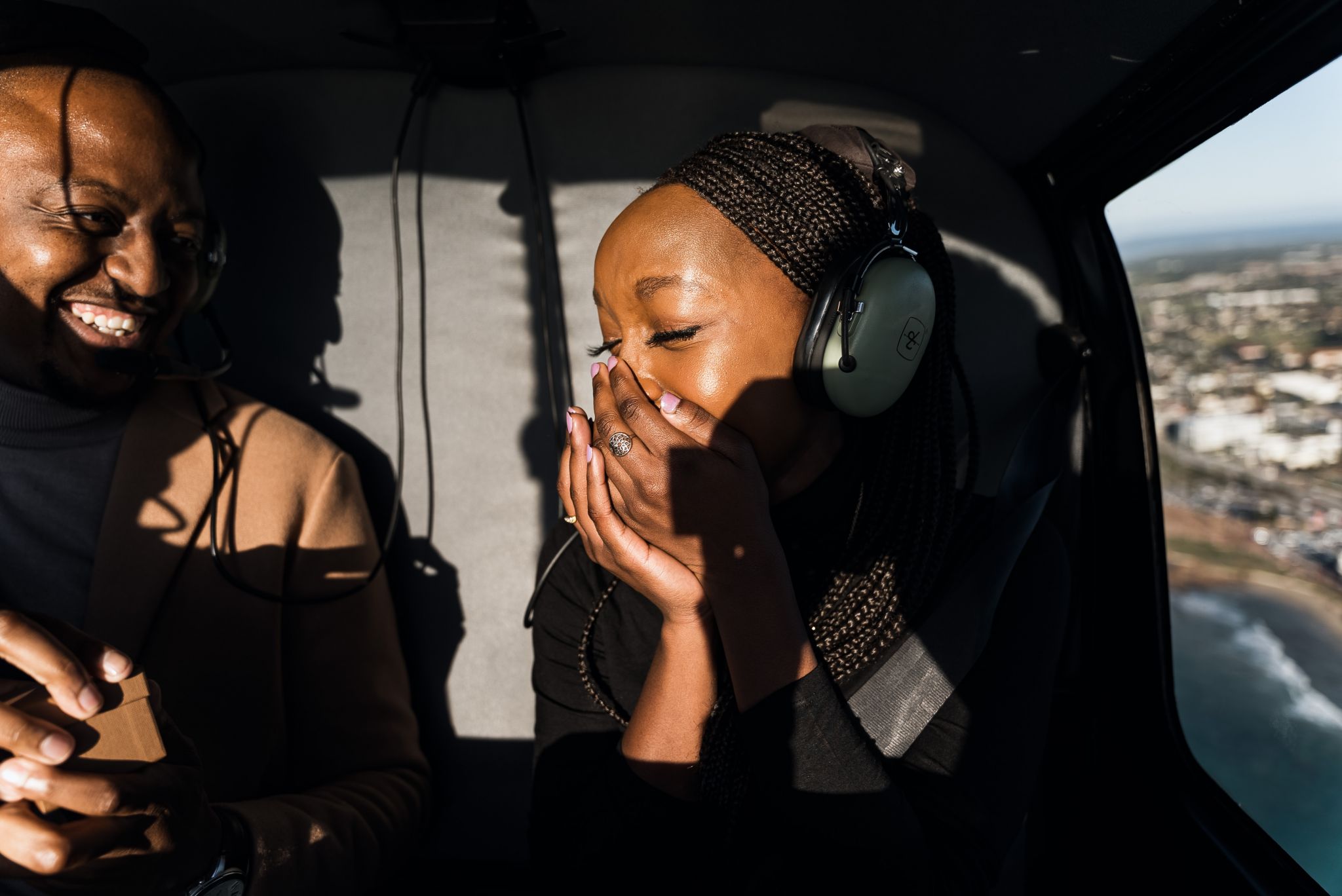 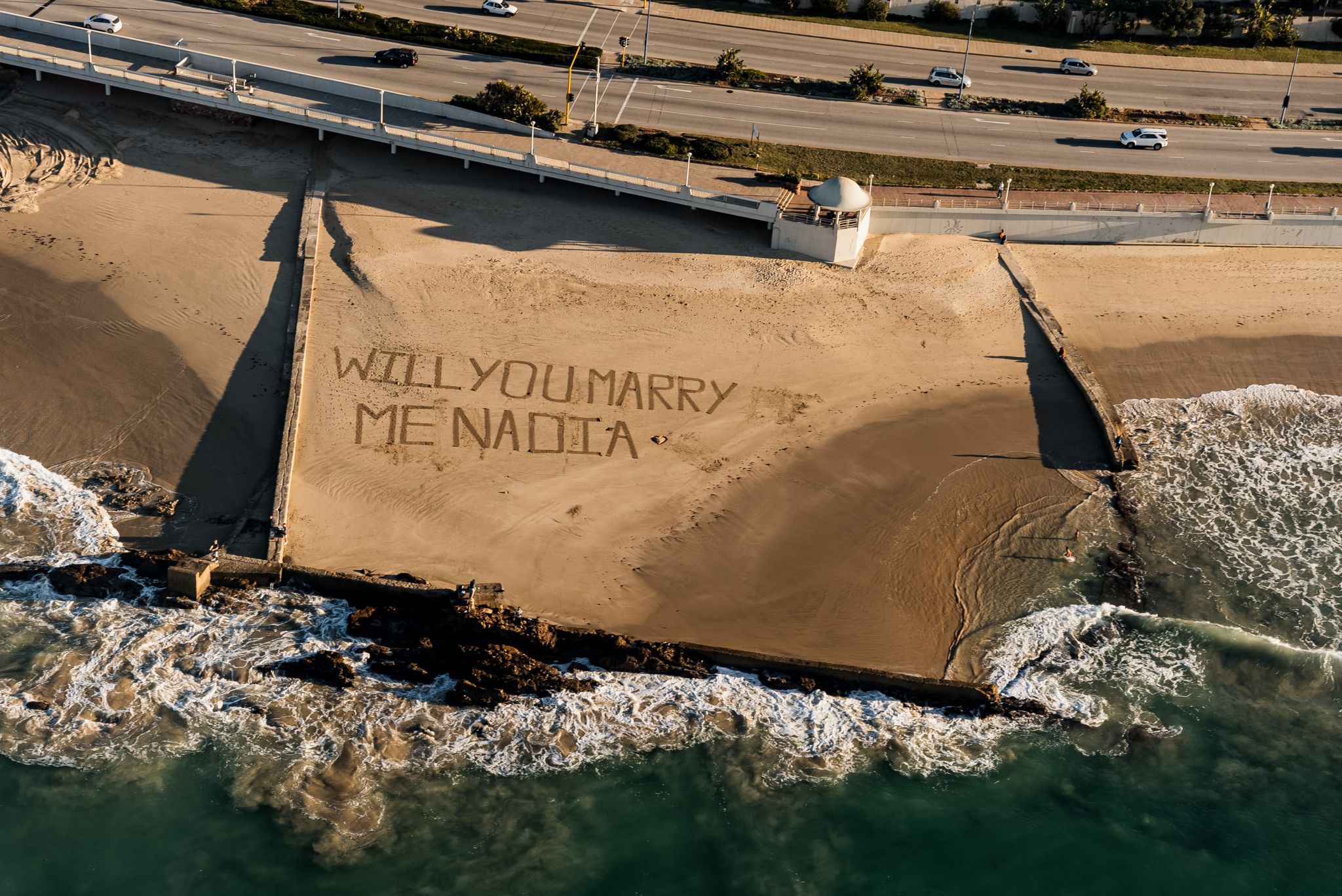 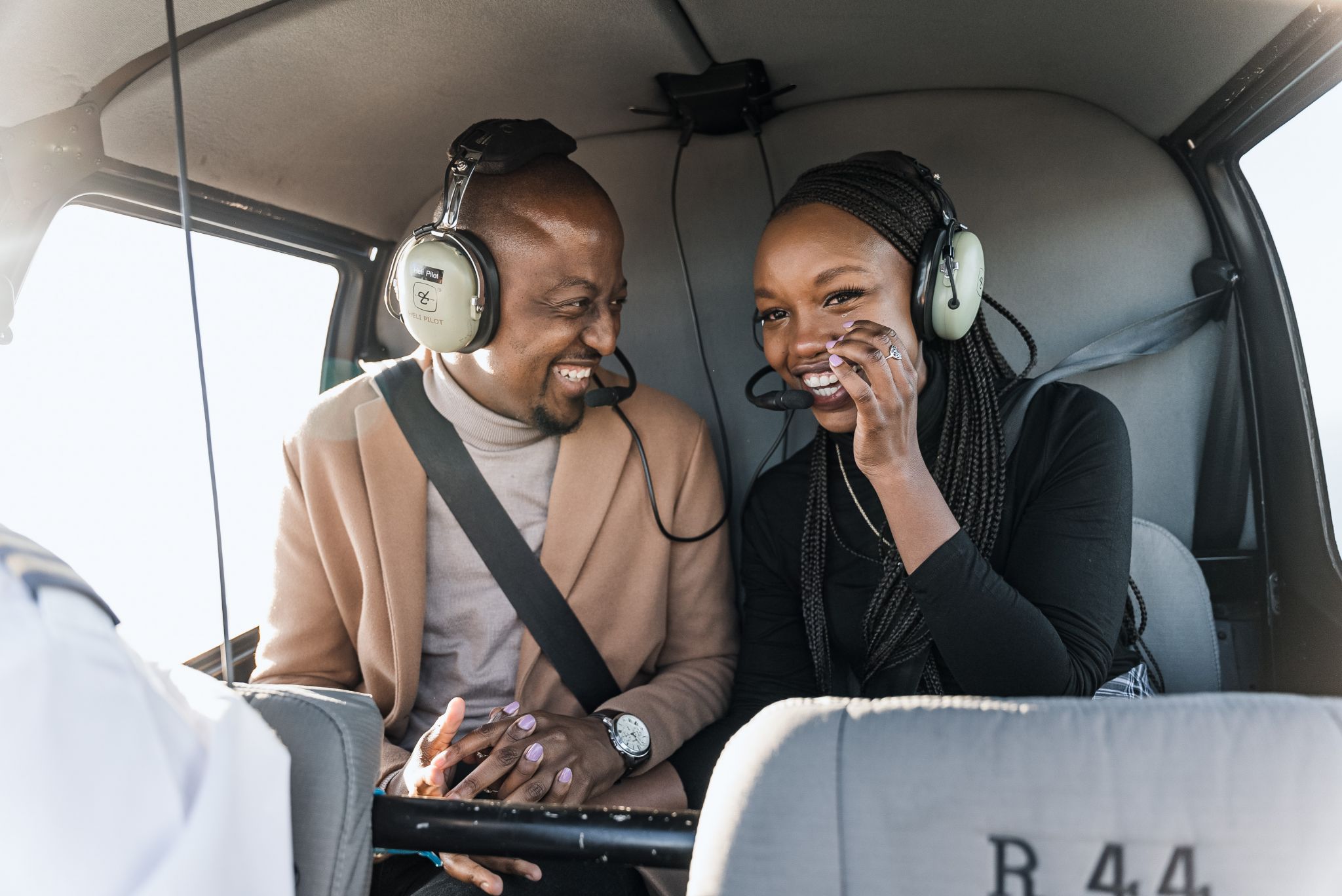 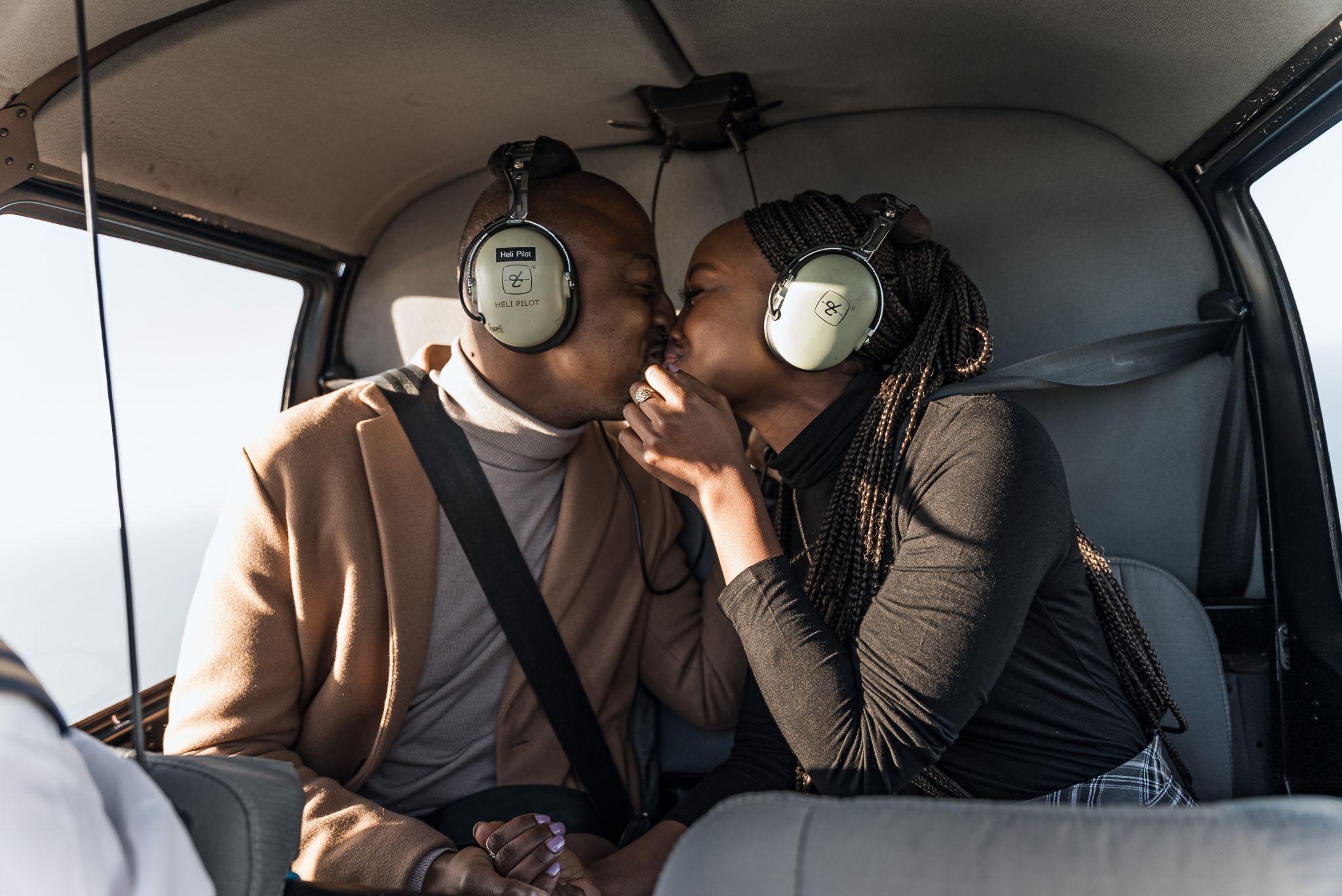 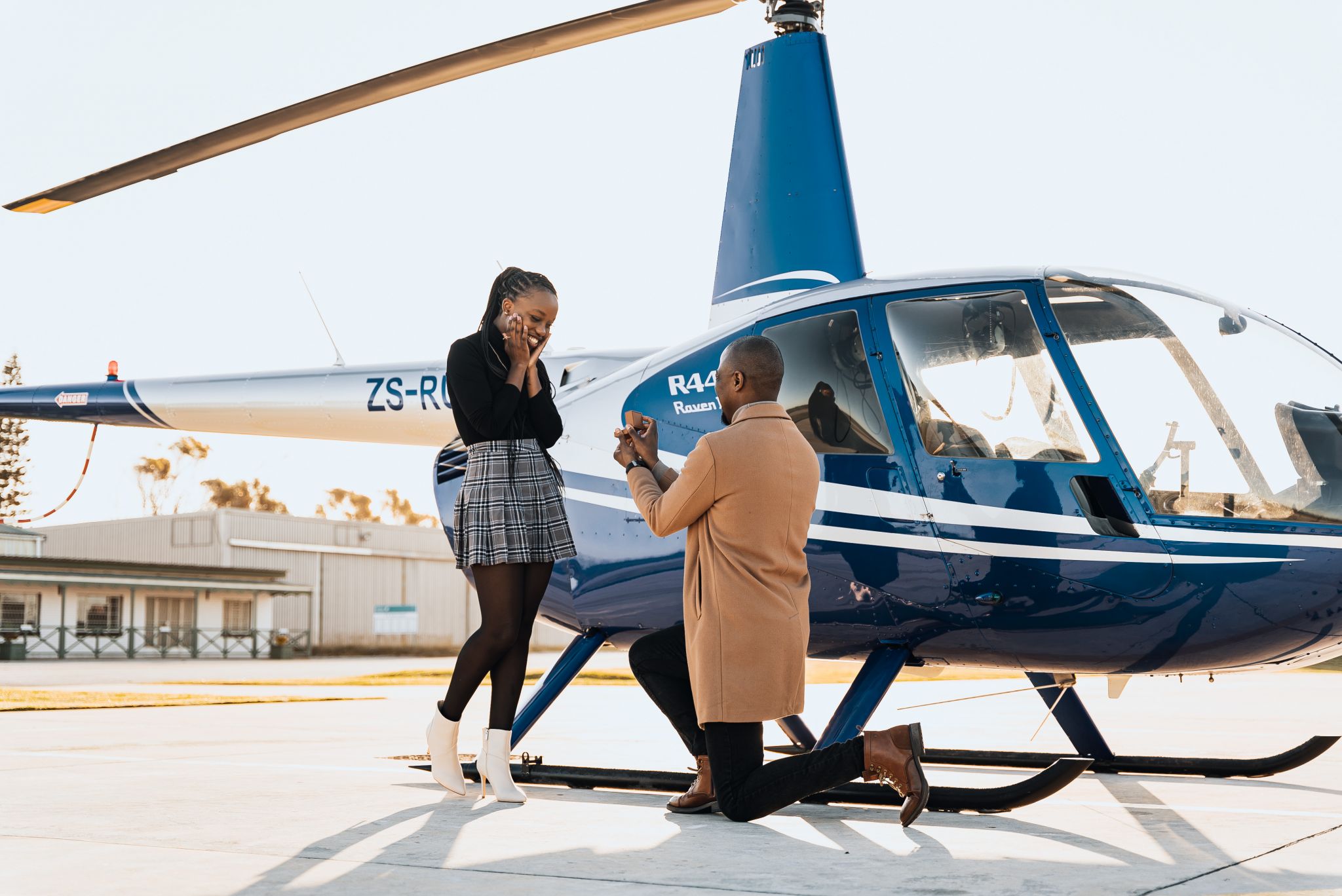 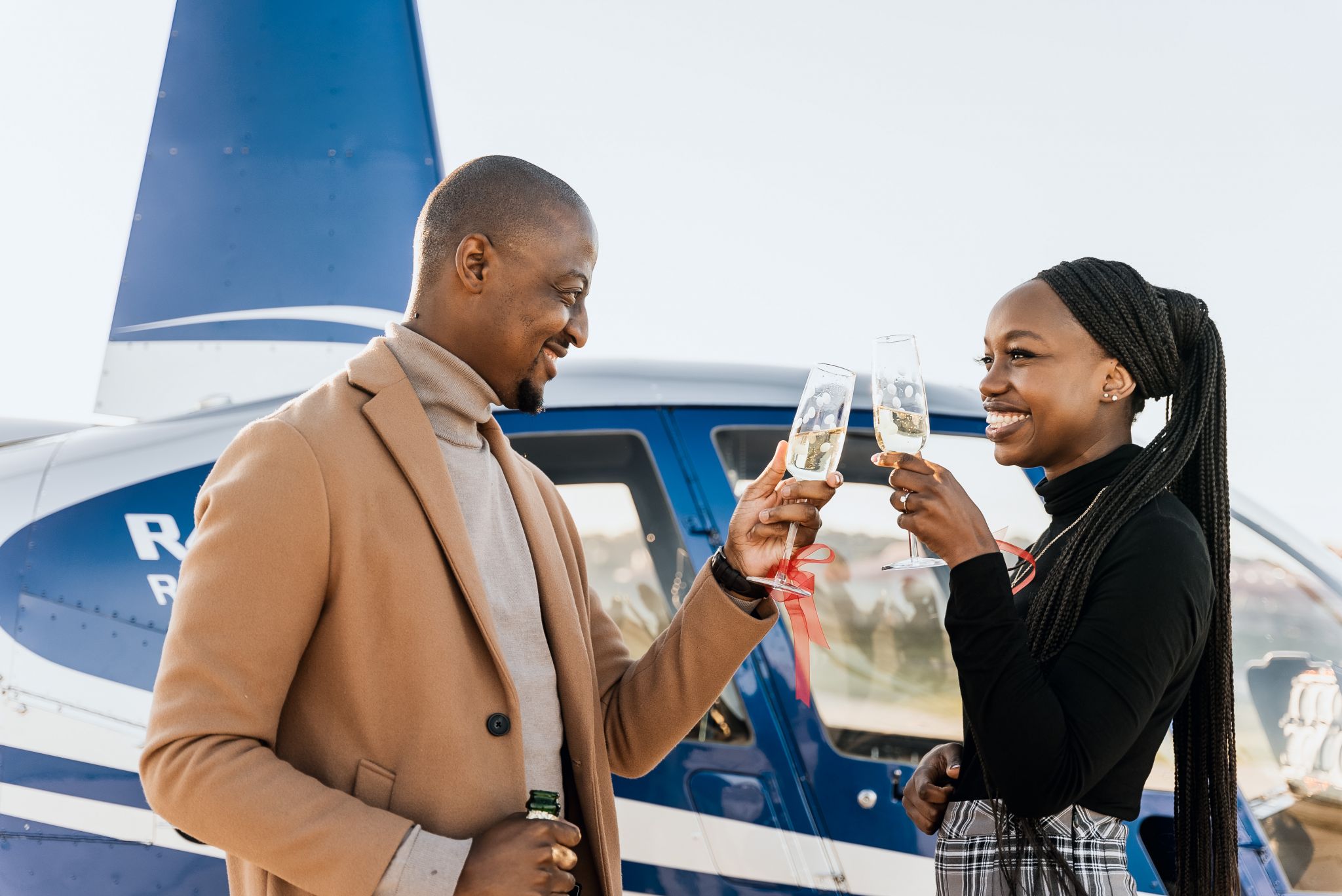 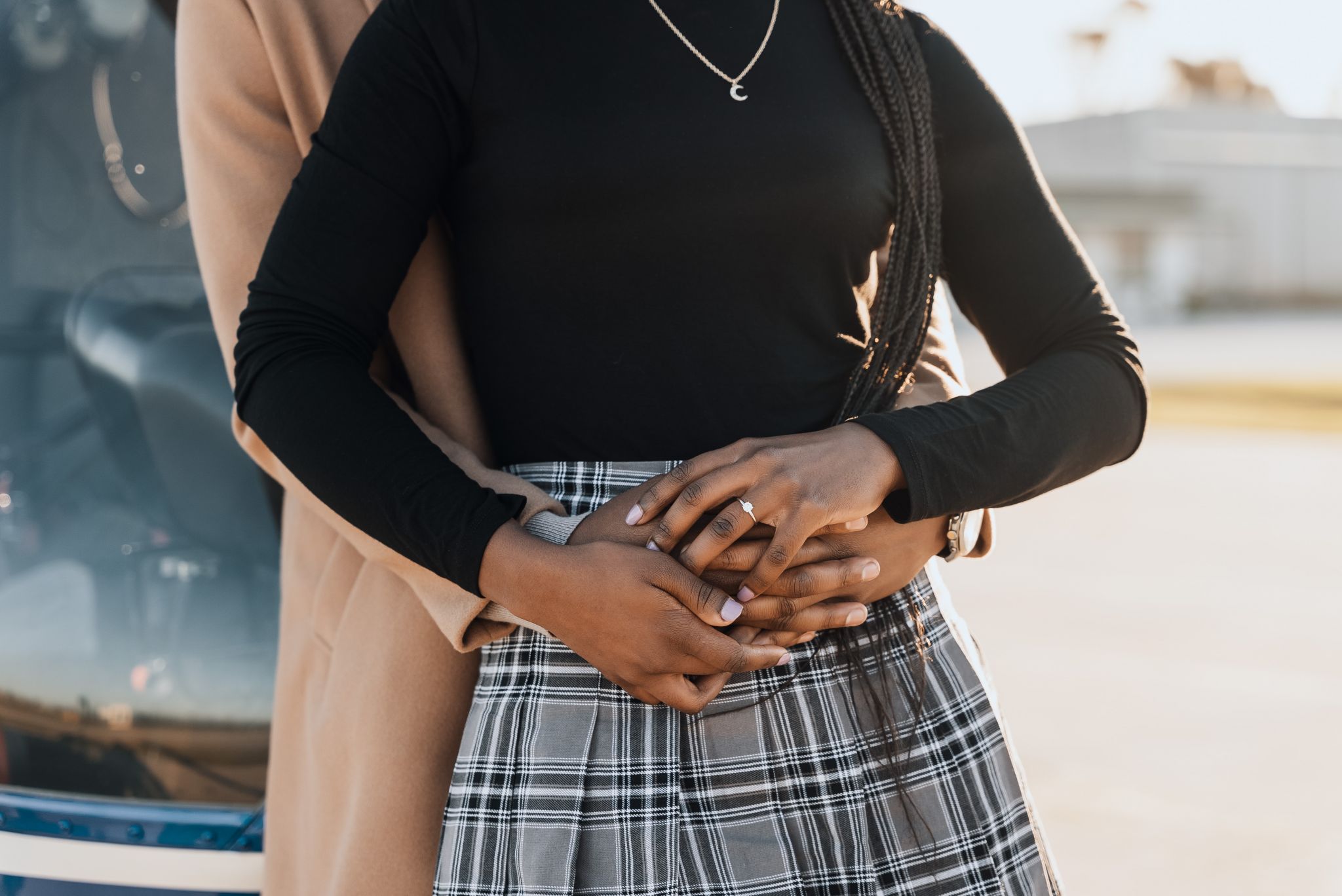 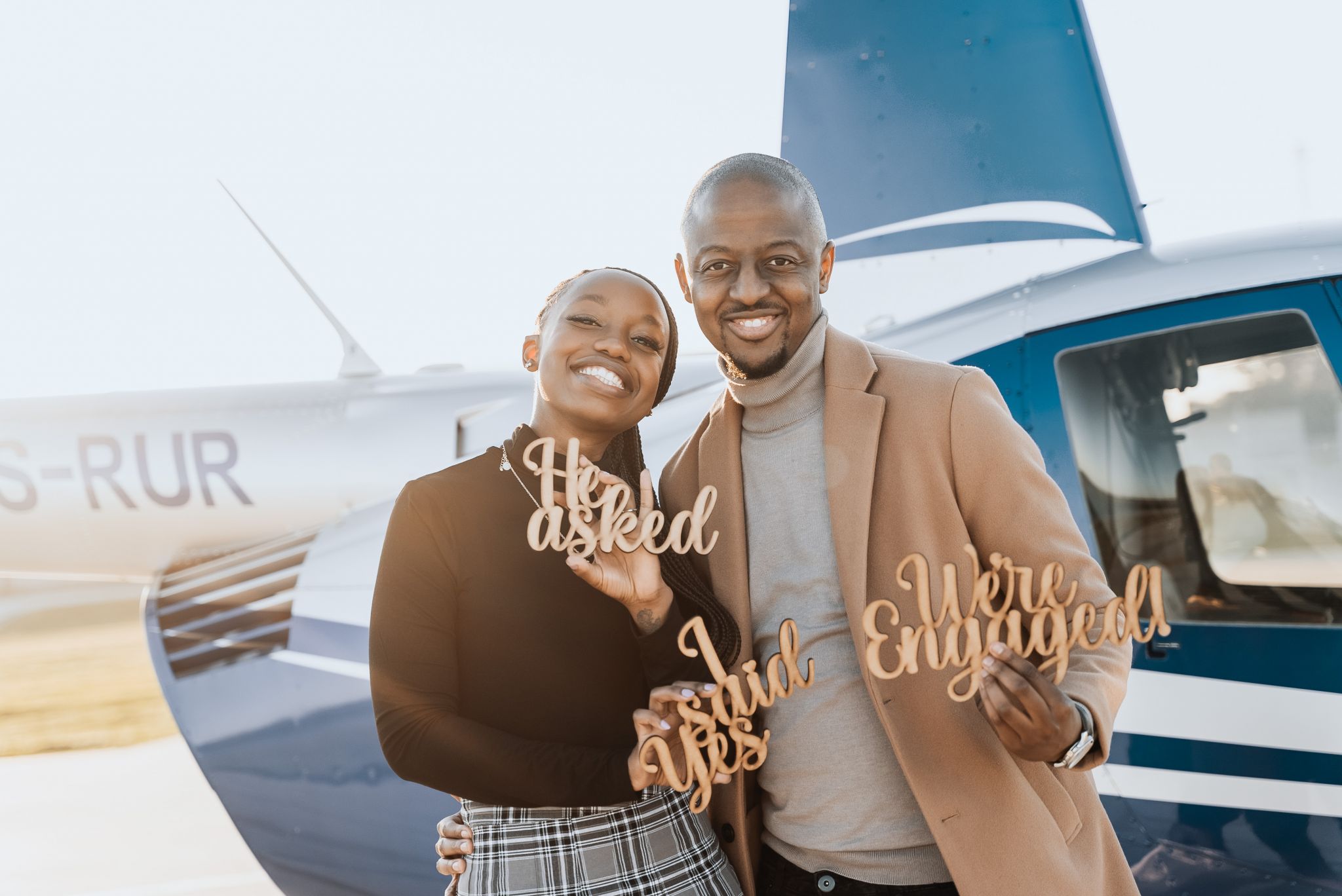 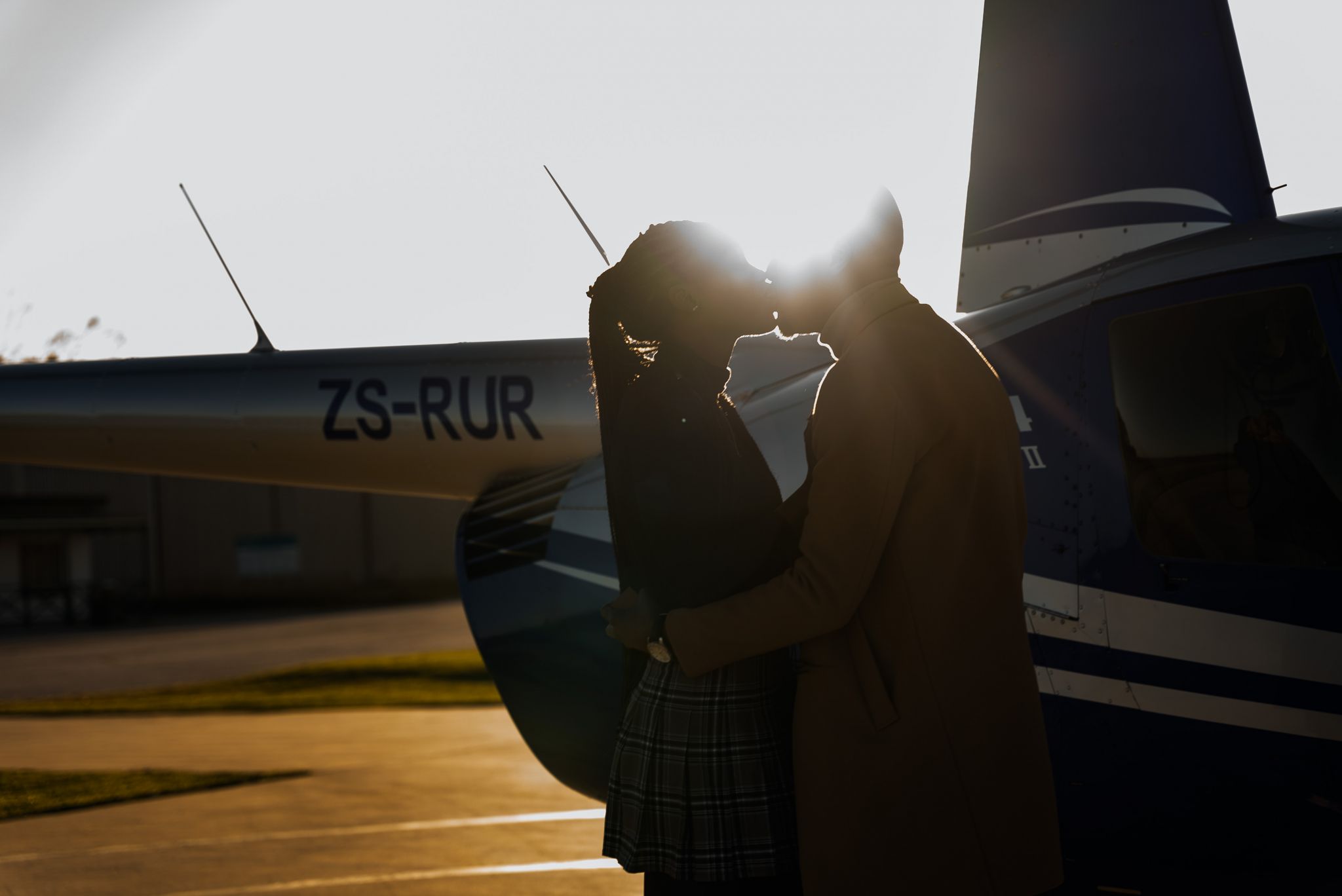