The rise of the proposal planner: ‘It’s not enough to get down on one knee any more’

You have found the man or woman of your dreams and are ready to pop the question. But where and how? Meet the professionals who can make the moment truly memorable. 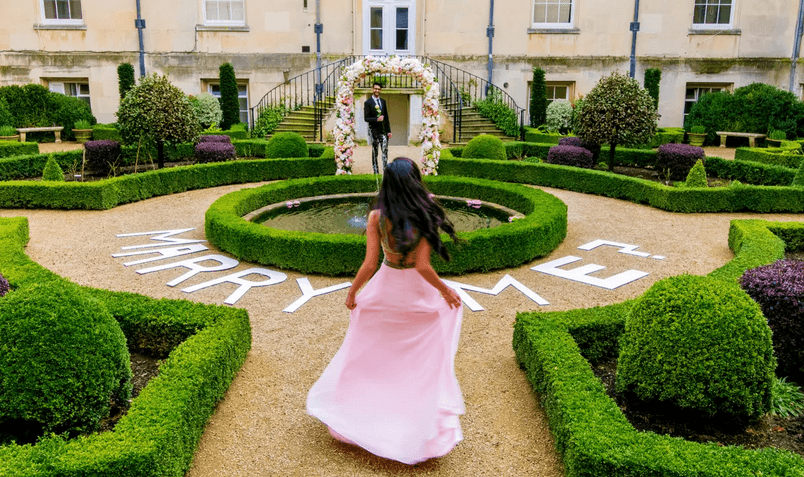 When 36-year-old Justus Parmar decided to propose to his girlfriend, Elisia, he knew it had to be two things – “unforgettable and big”. Less than a week later, he flew Elisia from their home in Toronto, Canada, to the UK, where he proposed in a capsule of the London Eye. Their fellow passengers were an incognito musician, who performed their favourite song, Ed Sheeran’s Perfect, and extras who lined up to reveal T-shirts that read: “Will you marry me?” She said yes.

The number of marriages in the UK may have been in decline since the 70s, with barely 240,000 couples tying the knot in 2016, but weddings are still big business, worth more than £10bn a year. With everything from e-commerce platforms such as Zola – which allows couples to plan their special day online and is valued at $650m (£520m) – to startups such as Bloomerent, which helps couples getting married in the same city reuse each others’ flowers, it is a rapidly expanding, tech-driven sector. And the latest innovation doesn’t even concern the wedding itself, but the proposal.

For his lavish proposal – which cost £6,000 – Parmar hired London-based firm The Proposers. Founded in 2012, the company has so far organised more than 1,500 proposals all over the globe. “We were the first to set up proposal planning in the UK and it’s still a pretty new thing,” says the company’s founder, Daisy Amodio. “When we started we were doing one a week and now we’re doing six to 10.”

Inspired by her experience of planning her brother’s engagement, Amodio noticed a gap in the market. “It’s been getting more and more popular recently, in tandem with the rise in social media,” she says. “People want epic photos or videos to show their friends or maybe their kids in the future. They don’t just want to get down on one knee at sunset on holiday. They want something bigger, they want a story to tell.”

Her company’s most expensive proposal cost £800,000. “For that, we hired all of Disneyland Paris; we had fireworks and a boat go through Paris, too. The couple then hired a private jet to Canada and he popped the question in front of Niagara Falls,” Amodio says. That proposal took three months of planning, but Amodio says most are done in a matter of weeks. “We just had a call to do a proposal on Tower Bridge the next day,” she says. “It’s intense but we get it done.”

For Parmar, the service was worth every penny. “I had bought this beautiful six-carat diamond ring and it started burning a hole in my pocket as I didn’t know how to go about the proposal,” he says. “I realised the end result would be a thousand times better if I worked with professionals. They kept it a total surprise – my fiancee had no idea it was coming.”

“I was completely shocked,” Elisia says. “Looking back at the moment on camera, there’s this hilarious and surprised look on my face. I am a bit of a hopeless romantic. I had always dreamed of meeting the right guy who would create a unique proposal, and so it was creative and smart of Justus to plan the proposal professionally. Sometimes when you have a grand idea it takes more than one person to make it happen.”

Others would rather keep their need for help a secret. Stephen (not his real name) decided he wanted to marry his girlfriend after only six months of dating, but he was unsure whether she would say yes. “I completely fell for her and I knew that if I didn’t ask her to marry me, I might lose her,” he says. “So I had to do something big to prove my love.” He recruited a planner in the US, where he lives, and they arranged for a proposal at the end of a hike, complete with a picnic and a banner asking the question. “She said yes and was so surprised and in awe of what I’d managed to do, I never told her that I’d had help. I wanted to enjoy the moment,” he says. He has no plans to tell her in the future.

“Not all guys are creative,” says the South African proposal planner Pippa Lund. “We’re here to translate their romance into a reality. Then all they have to think about is getting down on one knee and what to say.”

Planners witness a lot of proposals. So, have any of them ever seen a “no”? “The day someone says no is the day I quit,” Lund laughs. Others have had close calls. Rob Anderson, a magician who specialises in magic-trick proposals in Las Vegas, remembers: “There was a couple who were arguing and it got so bad that the guy called off the proposal discreetly with me just before I was about to perform. I’ve also had a couple break up the day before the proposal, and I’ve had at least one couple break up within a few hours of the proposal. But so far I’ve yet to have a straight no.”

Even in places where proposals tend to be more modest, planning is taking off. Pailin Thipayarat, the founder of the Singaporean firm Lynx Proposals, started her business in 2014. “In the first year, there was no one,” she says. “People here would normally propose quietly over dinner or have their parents talk to one another and arrange the wedding that way.” But, with the rise of social media, western ideas began to seep through Singaporean culture. “This new generation is willing to spend on something that will give them an experience for the rest of their life,” Thipayarat says. “They want to catalogue their memories above all else.”

Some traditions are slow to vanish, however: all the planners say their clientele is almost exclusively male. “The man asking the woman is ingrained in many traditions, and it’s something a lot of people like,” says Anderson. “Most women want the man to ask them and initiate the marriage.” Amodio agrees: “Only six women have approached us – only one to a man on a leap year, while the rest have been same-sex. I don’t know why more aren’t coming forward, but I’m holding out for a change.”

The planners’ own proposals were noticeably more subdued than those of their clients. “We just went for a walk,” Lund recalls. “He set up a little surprise with champagne and my favourite food. It was perfect.” Amodio’s was a similarly private affair in the flat she shared with her boyfriend. “Some people just want something small and elegant, which we can provide, or they might want to do it all themselves,” she says. “And then we’ve had one guy who had to have everything be about cats, so we hired a cat cafe and they were all dressed as cats and even sang a song. We’ve had a fake drug arrest and a fake interview, too. Some people are crazy – but each to their own.”