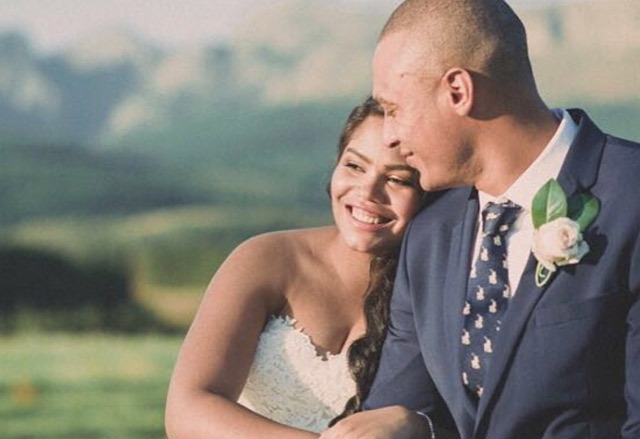 We are very proud to be featured on TOP BILLING for Travis and Zaylin’s wedding.

“Bulls winger Travis and his fiancé Zaylin have a huge appetite for life and they’re each other’s best motivation. Alongside his rugby career, both are studying, they’re raising a stunning daughter together and they recently got married.

Six years before this magical day near Paarl, Travis and Zaylin were at school, he had no plans for pro rugby, both were single – but all that was about to change. Travis’ first attempt to propose was interrupted by a rugby tour. Subsequent attempts also hit obstacles until, on his fourth try, he asked and she accepted.

What brought them through a distance romance is trust and putting in as much work on their relationship as went into Zaylin’s dress. Travis was flanked by some fine groomsmen, with Springbok player Rudy Paige, Reagan Ismaiel and Owen Jansen. Travis’ request for the reception was that there be plenty to eat and Pippa Lund made sure of that. ‘Elegance’ was the couple’s brief to floral designer Liz Puccini.

It was an especially moving day for Zaylin as her father Winston Smith, unexpectedly passed away after the wedding. She was fortunate to have him walk her down the aisle and dance with her on her special day. Now that Zaylin’s father has given Travis his daughter’s hand in marriage, the young couple will live and dance on in celebration of his life.”

Travis and Zaylin wedding on Top Billing was a highlight of our year. The full video coming out soon…